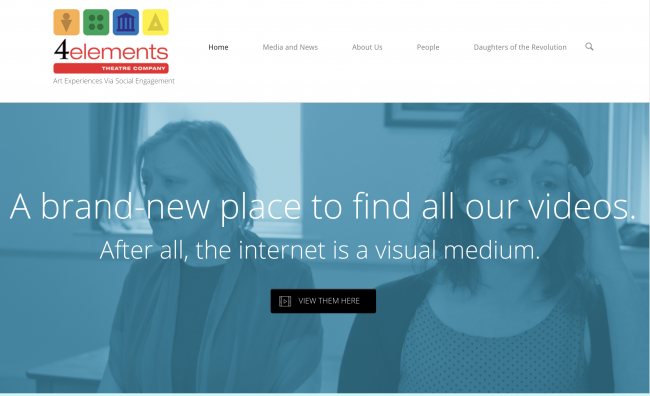 Finally at a place where we can focus on feedback.

Welcome back one and all. This is Ben Brown Jr., the visual designer for the site you are currently visiting, 4elements Theatre Company, writing this from Beaverton, Oregon, USA.

Even though it isn't exactly where we would like everything to be, the structure, links and layout have been cast for this project. I will be working with Kate Harris further to tweak things here and there, including training for her, over the next few weeks.

Most importantly, what she wanted was something visually bolder and mobile-friendly. There was nothing wrong with the previous site, I wish to go on the record as saying. However, as the means of the technology advances on how we access content on the world wide web, the site needed some much needed updating on being accessible to those primarily using mobile devices.

The previous site didn't have a great many photos. Additionally, with changes beyond anyone's control, including Google updating their API recently and making some of the previous website's functionality conflict and not operational, some changes had to be made, and fast. (API stands for application programming interface is a set of subroutine definitions, protocols, and tools for building application software, and if it sounds like a headache, it can be.)

One of the things you will notice is that all of the videos are now directly linked to a YouTube account. This is simply for ease of access, and it works well with the coding inherent in WordPress, which is the platform being used for this site.

Another thing that Ms. Harris requested was something more visually bold and bright. Using the color scheme in the 4elements logo, as well as the items in the logo itself, I was able to break up dead space and draw visual interest to each of the pages, much like what is done in a magazine layout.

Additionally, it seemed that there were not a lot of pics that we could fully make use of for some of the headers and banners. Again, using some simple color tricks in Photoshop and some archived images, I was able to bring the players to life on the screen in a manner that had not been utilized prior.

There is still work to be done, and know that this, like any other good website, is always a work-in-progress. Your feedback in critical, and we look forward to what you have to say.

I hope that everyone has an amazing time during the Daughters of the Revolution Tour this year. Working on this site has been a blast, and it has allowed me the opportunity to do some things for those in Ireland working on the Repeal the 8th Campaign and some other things to assist not just this site, but for other sites doing similar types of work. Thank you Kate, and thank you all.

Love to you all.