Ground-breaking drama aims to create dialogue about experience of childbirth

Down the Rabbit Hole of Maternity

Help us bring the Revolution on tour www.indiegogo.com/projects/daughters-of-the-revolution

Thank you to everyone who made the Daughters of the Revolution tour such a success!

Missed the tour? You can now see the full performance of the play and listen to the post-show discussions.

4elements are pleased to announce the final performance of our national tour of Daughters of the Revolution!

Following sold-out performances in Dublin, hosted by the Coombe Women and Infants University Hospital, and performances in Waterford and Galway, Daughters of the Revolution is coming to Cork as part of the Elephant Collective’s symposium Picking Up the Threads, Remembering Maternal Deaths taking place in University College Cork March 27th and 28th.

The performance of Daughters of the Revolution will take place at 1:30pm on Wednesday, March 28th in the Boole 1 Lecture Theatre in University College Cork.

4elements would like to send a big thank you to our Indiegogo crowdfunding supporters who helped make our tour possible: Melinda, Chris, Marcia, Alan and Cindy, Jenny, Johanna, Thomas, Colman, Sarah, and Anna Mae thank you for your incredible support! 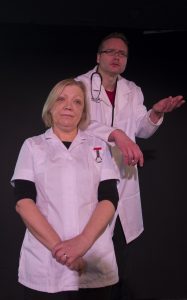 Support 4elements to Tour the Revolution!

4elements are delighted to welcome our panel for the post-show discussion following performances of Daughters of the Revolution in the Mick Lally Theatre, Galway this Friday and Saturday 23rd and 24th of February:

Tara Durkin: Mother of three children, is a birth and postpartum doula, antenatal educator, and breastfeeding counsellor in Galway City

Bairbre Brooke: Doula and Gentlebirth instructor in Galway and chairperson of the Doula Association of Ireland (DAI)

Aisling Dixon:  Registered nurse and midwife having worked in Ireland, the UK and New Zealand.  She has worked as a midwife Portiuncula Hospital since 2005, and as a self-employed community midwife (SECM) since 2006.  She is also an IBCLC lactation consultant and hypnobirth training facilitator.

Breda Kearns: Mother of three and founding member of AIMS Ireland.  She is currently the Vice-Chair of AIMS. She has also campaigned for improved perinatal mental health services

Sally Millar: Self-employed community midwife working in Galway, Clare and Limerick for 22 years before retiring in 2016.  She is currently working part time at NUI Galway and is a member of the Gort Breastfeeding Support Group

Judy Murphy interviewed 4elements director Kate Harris on writing and directing Daughters of the Revolution, ahead of performances of the play in the Mick Lally Theatre, February 23rd and 24th.

In the run up to Daughters of the Revolution coming to the Mick Lally Theatre in Galway (Feb 23rd&24th), we have the post-show discussions from the sold-out performances in the Coombe Hospital available on SoundCloud.

You can help 4elements continue to create the space for these incredible experiences and conversations!

Daughters of the Revolution will be coming to Galway’s Mick Lally Theatre on Fri/Sat 23rd and 24th of February, 8pm.

2017 was a busy year for Daughters of the Revolution:

In September, 4elements had hugely successful performances in the Coombe Women and Infants Hospital (CWIUH), with both performances selling out and participation on the post-show panel from the Assistant Directors of Midwifery in the Rotunda and National Maternity Hospital Holles Street, Fiona Hanrahan and Margaret Hanahoe, as well as consultant obstetricians Dr Jennifer Donnelly (Rotunda) and the former Master of CWIUH Prof Chris Fitzpatrick. Dr Krysia Lynch, Chair of AIMS Ireland, and Deb Davis of Wicklow Doulas represented the perspective of service users.

With the funding of the Anne L Mulhall Scholarship and the support of the School of Midwifery (TCD), 4elements ran workshops with midwifery students exploring the impact of performance on attitudes to listening and empathy, furthering the outreach goals of the project and research into the effectiveness of the project.

Thanks to the support of the Waterford City and County Arts Office, Daughters of the Revolution had its first performances outside Dublin in the Waterford Central Arts Theatre.

The podcasts of the post-show discussions in 2017 will be available on SoundCloud in January 2018, with links on www.4elements.ie.

Director, Kate Harris, has written a case-study on the development of Daughters of the Revolution in the chapter: ‘Performing the revolution, creating a counter-narrative on birth in Ireland’, which will be included in a forthcoming book on maternity, Untangling the Maternity Crisis, edited by Nadine Edwards, Rosemary Mander, and Jo Murphy-Lawless, published by Routledge in Spring 2018.